Raina Jones answered our advert for crew on the heavy horse Facebook page and has temporarily moved to Devon to take up this unique opportunity to gain further experience working the heavy horses. 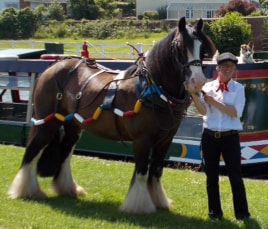 You may think it's unusual to see a woman working the barges, but she joins a long line of working boatwomen. During the busy working years of England’s canals, families lived aboard the barges:

‘The boatman’s wife does the cooking, assists in steering, and takes a turn with the bigger children in walking along the canal bank driving the horse, mule or ass’ - Factory and Workshops Act Commission, 1876.

Canal boatwomen worked long hours and were out in all weathers, so they were sensibly dressed. They wore a full-length skirt, a blouse, a pinafore to keep them clean and a shawl. Their bonnets were decorated with long, heavy frills to keep the sun off their heads and necks. When Queen Victoria died, boatwomen adopted black bonnets as a mark of respect, and this became standard wear for some time amongst older boatwomen. Luckily for Raina our uniform is a little easier!

During World War II women who had never worked on the canals volunteered to become trainee boatwomen. The boaters jokingly nicknamed them ‘Idle Women’ because of the ‘IW’ (Inland Waterways) badges they wore!

Over the years on the Grand Western Canal aboard Tivertonian, Pat, Kim, Tracy and Michelle (to name but a few) have kept the tradition of women working the boats alive. We're very glad to have Raina on our team and wish her every success.