The picture above is of the Grand Western Canal working. This picture was taken the Tiverton side of Whipcott Bridge. You can see the horses in the background and tub boats full of stone.

How it all started...

In the old perilous days of sail so many ships were lost navigating between the Bristol and English Channels around Lands End. A grand plan was dreamed up to connect up the Bristol Channel with the English Channel by inland waterway. The oldest Canal in the country (using locks) is the Exeter Canal (1566) making it the first canal to be built since the Romans. The idea was to join the Exeter Canal with the Bridgwater & Taunton Canal. Original Proposed Route

Above Video: A Georgian Fair to Commemorate the 200th anniversary of the opening of the Grand Western Canal in 1814 and a re-enactment (in 2014) of the famous Sampford Peverell "Navvies Riot"... (Click Here to watch video on YouTube)

In 1796 an Act of Parliament granted permission for the Grand Western Canal to be built. John Rennie surveyed the canals route and supervised the construction work up to 1814.

The first section of the Grand Western Canal was designed and built as a broad/wide canal. Work commenced on the summit section from Lowdells to Tiverton in 1810 and was completed on the 25th August 1814 at the cost of £244,500. Due in the main to John Rennie's surveying skills and some canal engineering brilliance, the canals water level is completely uninterrupted for the full 11 1/4 mile section, with no locks or lifts necessary, which in part led to this sections future success. The canal is fed by using a number of freshwater springs that are in the bed of the canal between Fenacre bridge and Lowdwells. (This is the section of canal that is still in operation today. The full 11 1/4 miles is navigable from Tiverton basin to Lowdwells)

After many delays, eventually the Grand Western Canal was extended a further 13 1/2 miles from Lowdwells to Taunton (joining up with the Bridgwater and Taunton canal). Work on this section started in 1830 and opened on June 28th 1838. Although, this section was only built as a single/narrow canal (half the width of the Lowdells to Tiverton section) it included 2 x locks, 7 x lifts and 1x Inclined plane, which together took the tub boats used on this section up and down a height of 262 feet. By the time this section was finished the extension plans from Burlcscombe to Topsham (joining up to the Exeter Canal) were abandoned. 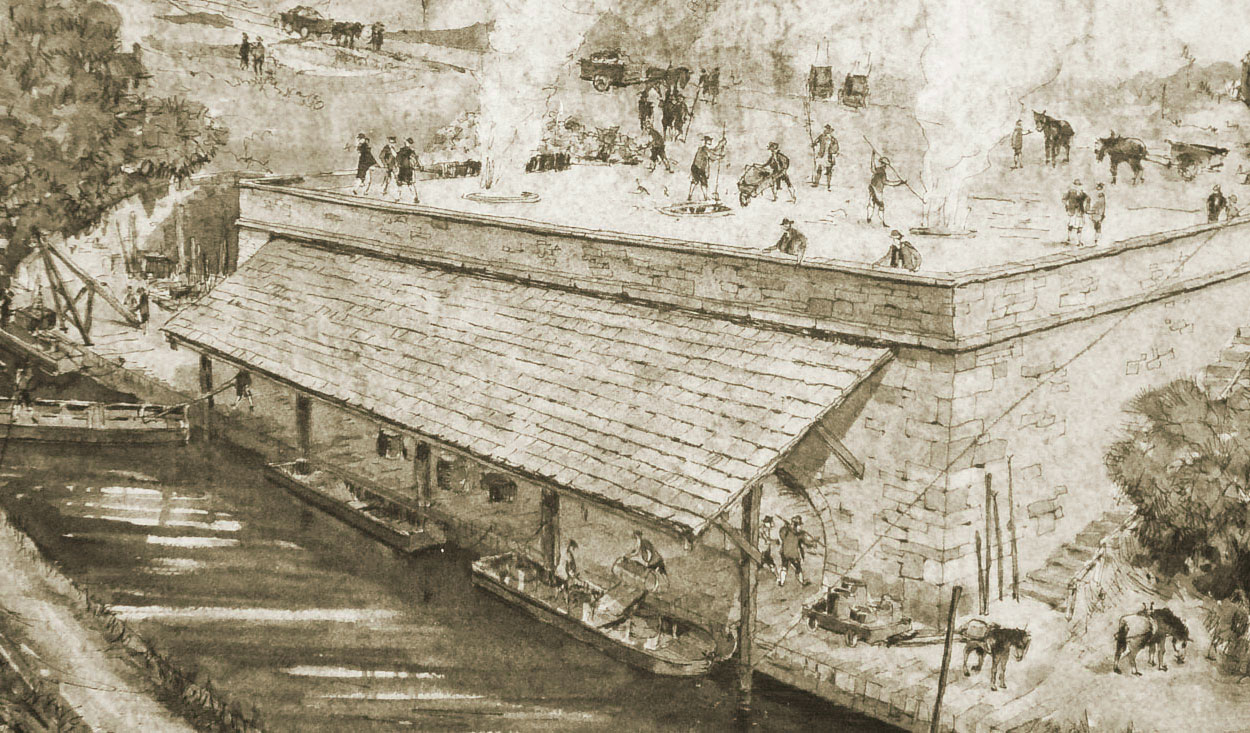 Lifts & Plane (in this section from Lowdwells to Taunton)

Those requiring more information on the Lifts please Click Here:

The Canal worked alongside the railway for a short time with the Bristol and Exeter railway branch line to Tiverton opening in 1838, giving the the Grand Westen Canal an aqueduct at Halberton, based on a design by Isambard Kingdom Brunel. It was Brunel's broad gauge railway that later thundered underneath.

For a brief period these two very different sections of the Grand Western Canal worked together carrying fairly large amounts of traffic, not only of limestone from the quarries near Holcombe Rogus to Tiverton and Taunton, but also coal and other goods from Taunton to Tiverton. 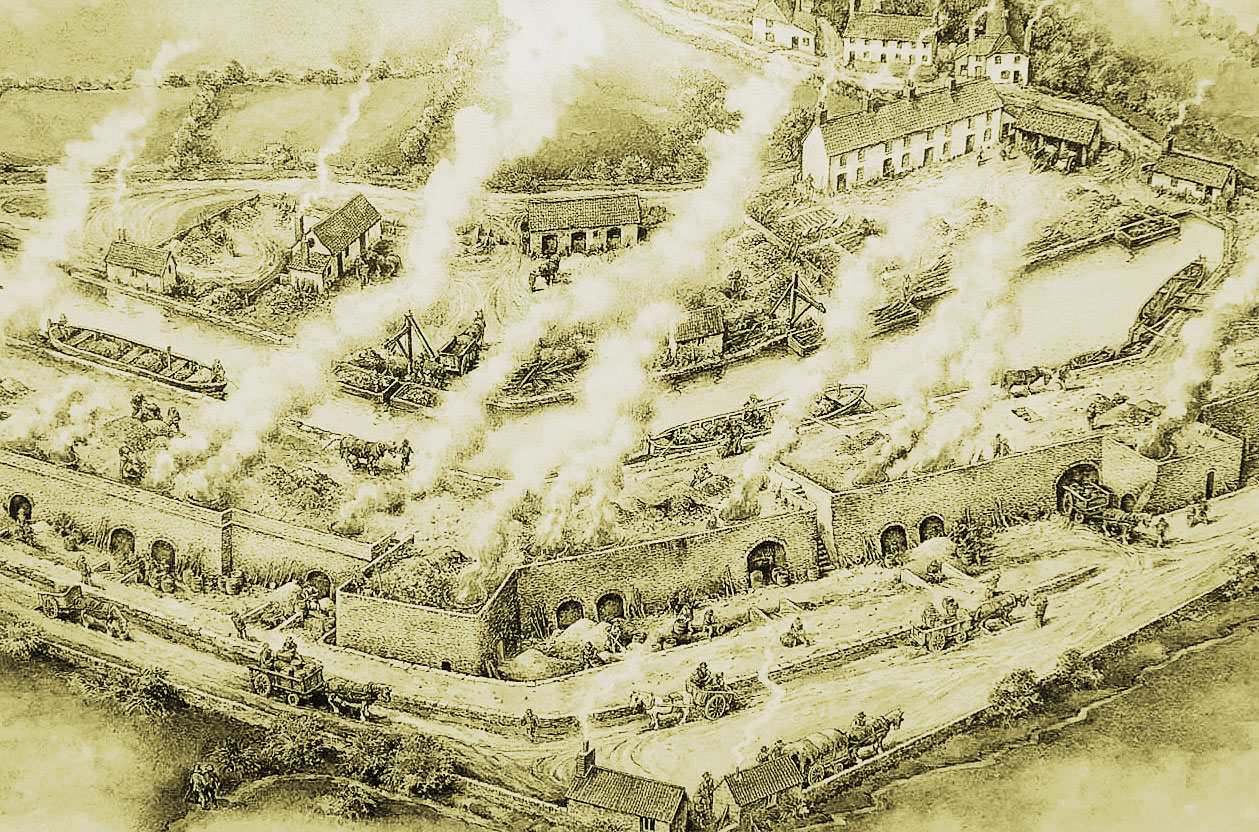 With the opening of the Bristol and Exeter railway in 1844 and the Tiverton branch completed in 1848, traffic on the Grand Western Canal began to drop significantly and in 1864 the section from Lowdwells to Taunton was sold to the Bristol and Exeter railway company and was officially closed in 1867 and then abandoned. This section of canal had a working life of less than 20 years. (This section of canal today has been filled in for the most part, but work by enthusiasts have cleared an area at Nynehead Lift to show its original construction)

By 1876, the Tiverton Railway Branch Line, and other local lines had become part of the Great Western Railway and by 1884 the track had changed from broad gauge to standard gauge. In 1927, Halberton Halt was opened. At its busiest, 10 to 12 trips per day were made taking an average of 12 minutes to complete one way but by 1964, now owned by British Rail and under the infamous Beeching cuts, the line closed for passenger traffic, to be followed by freight in 1967. 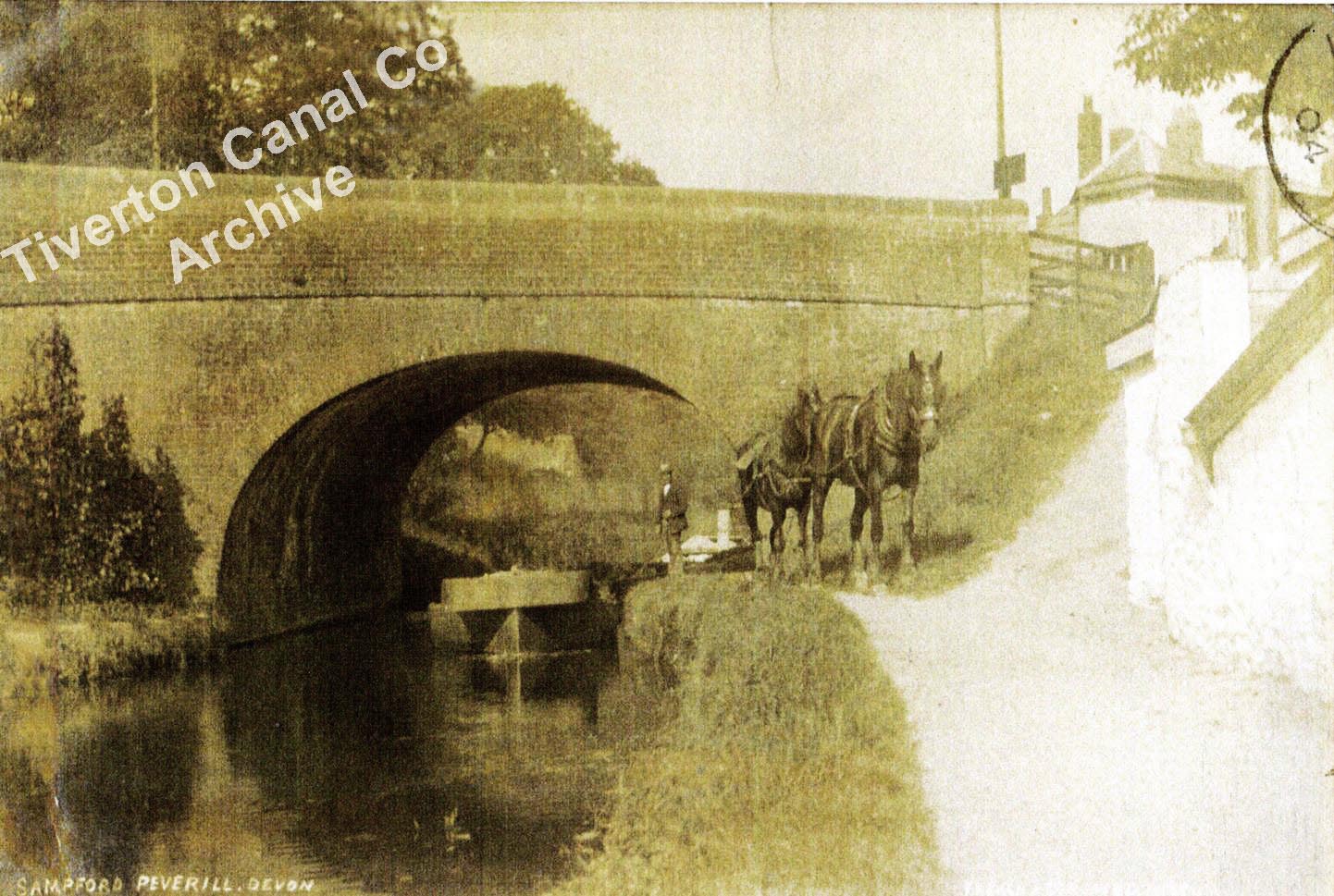 The first section of canal between Tiverton and Lowdells remained open. The Canal was profitable mostly carrying coal and limestone in Horse-Drawn tub boats from the quarries to the kilns at Tiverton. The stone was fired in the kilns to make lime for farming and house building.  This continued until 1924 when commercial stone and coal conveying was finally stopped.

Once the commercial traffic of stone had finished on the canal, the 11 miles was leased by the Railway company to a gentleman by the name of Joseph Barry for the commercial growing of lilies. The lilies grew from June to early August and were harvested by hand by Joseph Barry and his son Joe (pictured below) amongst others.  Once harvested was sent to the Midlands and to Covent Garden in London the lilies were mainly used for wreaths. As the condition of the canal worsened only 4 of the original 11 miles were navigable by boat Joe Barry said " My brother almost broke his back hauling a 12 foot dingy through the weeds". 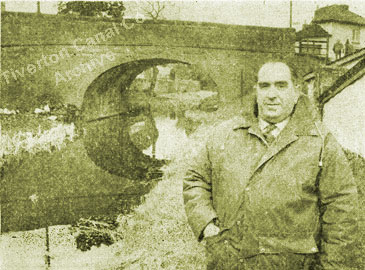 In the 1930s serious leakage of water occurred in the stretch west of Halberton. The railway company attempted to staunch the leakage first by bank repairs and then by puddling of the bottom. But the leakage continued and the company finally installed concrete stanks at two points leaving a half mile dry section between.

In 1947, The canal passed into the hands of the British Transport Commission (Western region). Their redevelopment committee, reporting in 1961, found considerable local interest in the preservation of the canal for its amenities; and recommended that it should be legally closed to navigation, but maintained for worthwhile projects when required.

The Grand Western Canal was formally closed to navigation in 1962.

The last steam train on the branch line to Tiverton was the “Tivvy Bumper” which can be seen today at Tiverton Museum. n.b. The Museum also has a section on the history of the Grand Western Canal.

The Canal slowly fell into disrepair and was largely unused when proposals to fill in the canal were heard of by local residents who then formed a group in 1962 called "The Tiverton Canal Preservation Society" to save the canal. Then in January 1964 the Grand Western Canal was handed over to the British Waterways Board. 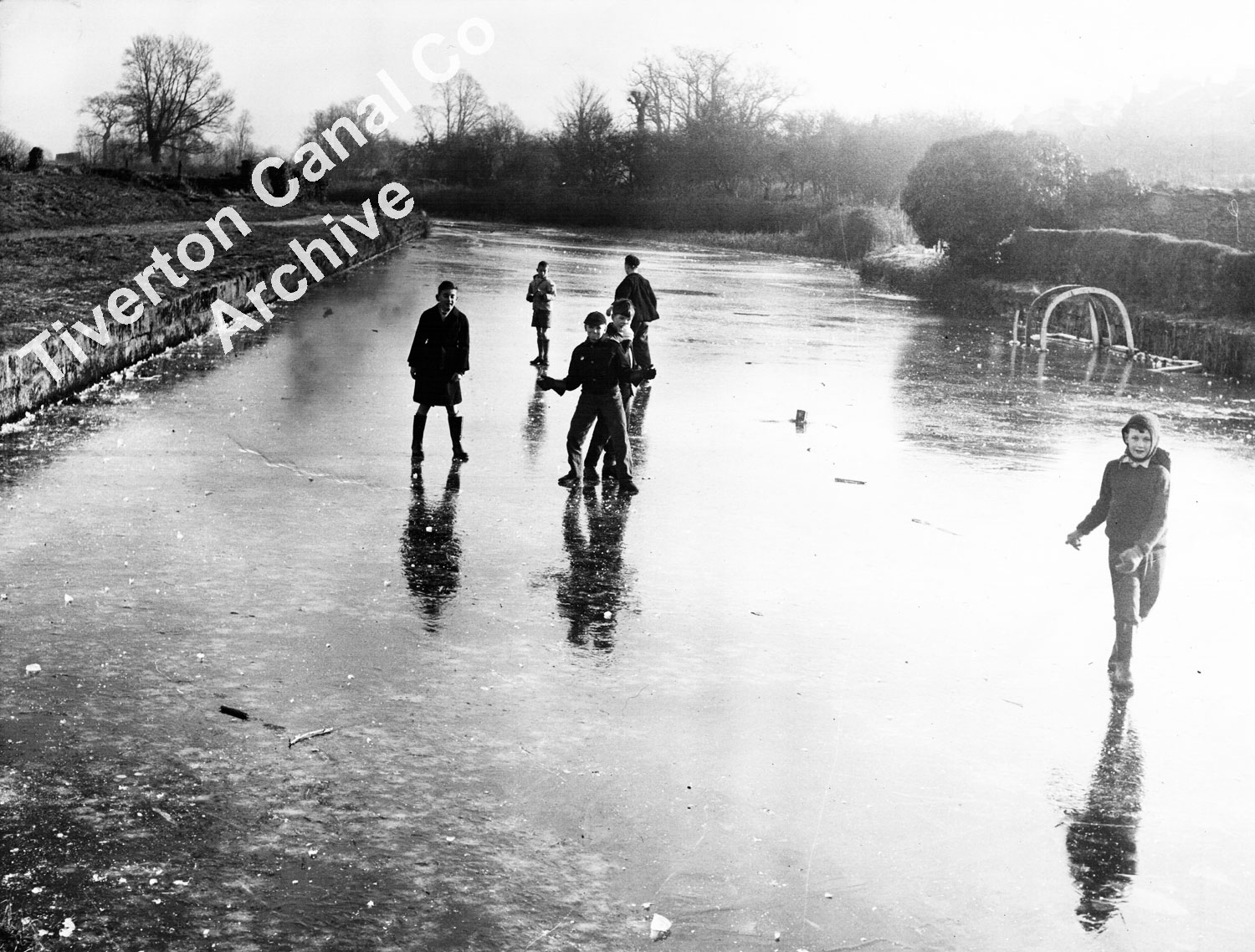 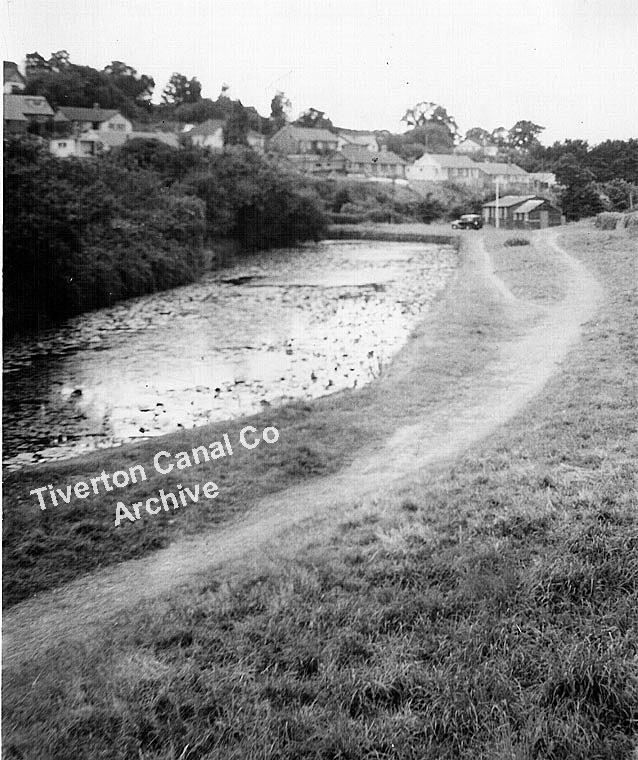 In 1967 a preliminary report was then carried out by the Darlington Amenity Research Trust to the, then Tiverton Borough Council and Tiverton Rural District Council.

The public campaign and the Tiverton Canal Preservation Society, proved successful and then in 1971 Devon County Council took ownership from British waterways board together with a cheque for £38,750 to help the council put the canal in order and ongoing maintenance.

Many people believe, it was the Horse-Drawn Barges at Tiverton that were the first boats on the water in nearly 50 years ...  but, they were beaten to the post by Mr Keith Brown (seen here with his hat on)  his punts, and later rowing boats also worked by Merv Rainy, made it on to the canal first, in the early 70s (in the Tiverton basin). 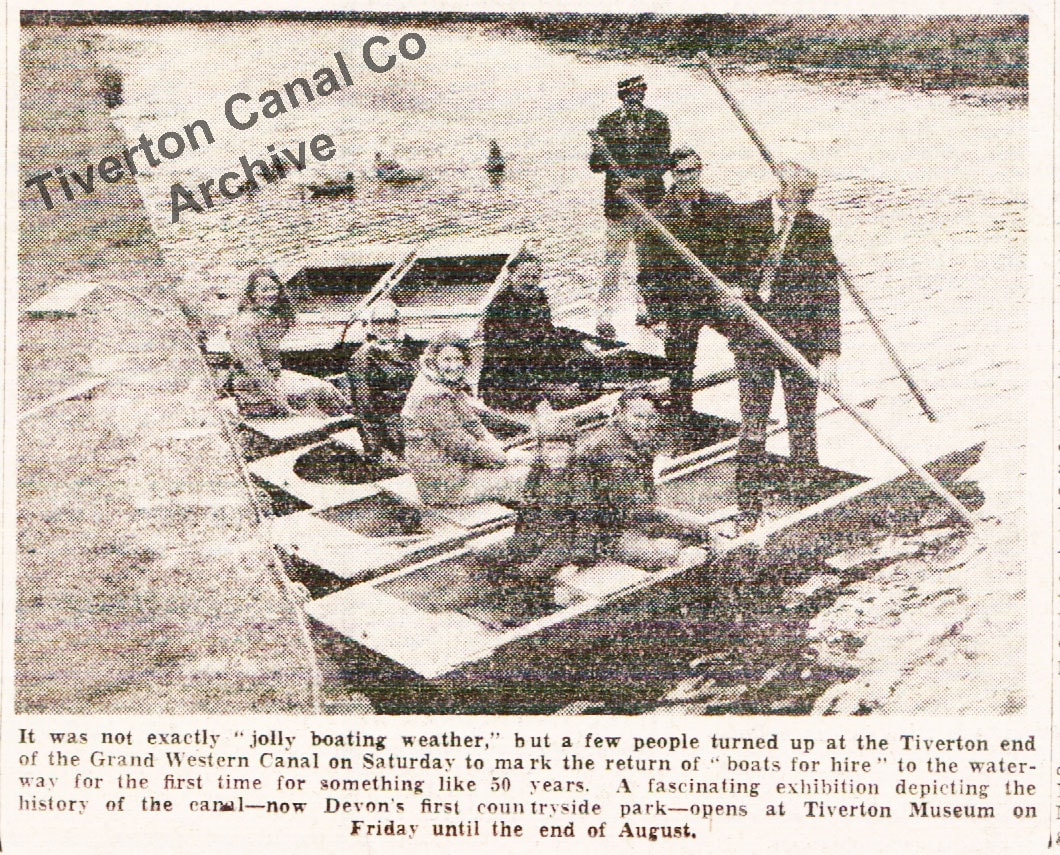 Then on Sat 13th July 1974 The Horse-Drawn Barge "Tivertonian" had her first Trip on the Grand Western Canal from Tiverton to Sampford Peverell. Helen Harris (Grand Western Canal Author) christens the barge before her journey starts. 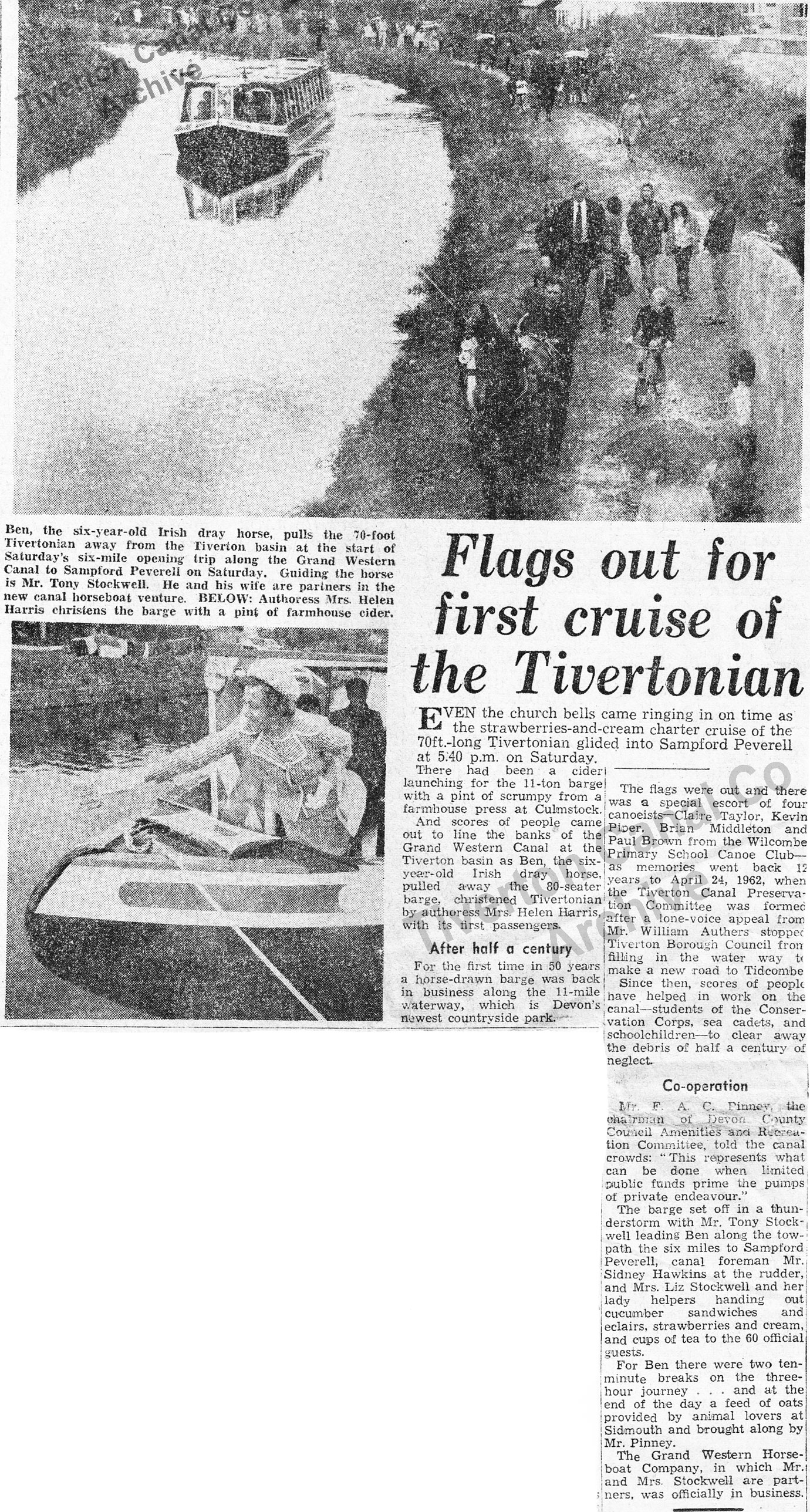 Newspaper cutting of the day: First trip on the Canal for Tivertonian in 1974.

The old canal lining (put in the canal in early 70s) was now giving way and causing substantial leaks in the bed of the canal again. This old TV News footage from Television South-West (TSW) in 1987 reports on the Grand Western Canal with the very serious leak. Later in 1990s the canal was newly relined between Swans neck and Greenway bridge.The project was funded between Devon county council and Mid Devon district Council, with an approximate cost of £1 million.

Many of the original structures can still be seen today and some are protected by Grade II listing, including the Tiverton Basin and Waytown limekilns, road bridges designed by John Rennie and the 40m long Waytown Tunnel.

View the a Canal Map as it is today, here.

n.b.
Although the official name for this canal is the Grand Western Canal it is always been affectionately referred to as the Tiverton canal by locals, the preservation society and visitors alike.

If you have been inspired the story of the Grand Western Canal and would like to be part of keeping the Canal alive for future generations, please visit the Friends of the Great Western Canal website.

On Facebook? Find out what is going on now along the Canal with news, pics and videos.